Choices: Stories You Play is an app game for Android and Apple created by Pixelberry Studios in 2018. The game has over a million downloads on Google Play with about a 4/5-star rating. Choices is a role-playing story-telling game. It’s very similar to the “choose your own adventure” genre of books, only better. With Choices, you not only get to choose certain actions to progress the story, but you also get to create your own character by picking out their skin tone, hair, outfit, and name. This way, you can choose to make yourself or anyone else you choose.

The artwork and storytelling drive the Choices: Stories You Play game, making it so popular with its players. When the game first started out, there were only three stories to choose from. Now, there are dozens! These stories are broken down into categories, so it is easy to find whatever you’re looking for. The romance stories seem to be the most popular, but there are also adventure, horror, mysteries, and more.

To begin your story, players need to simply pick a category. From there, multiple books will appear. It’s best to start with the first “book” in the series, as to not get confused. However, it should be noted that not all the books in Choices are part of a series; some are one-shots. Once the player picks out a story, it is time to play! 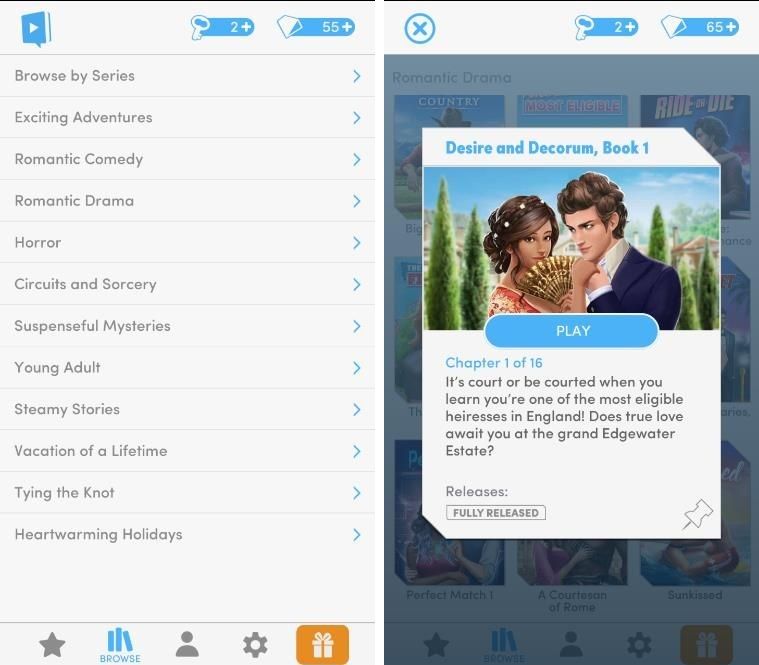 One of the best parts of Choices: Stories You Play is that the main character (which the player controls the actions of) is somewhat customizable. As mentioned earlier, players can customize the character’s skin tone, hair, outfit, and name. In some of the stories, players can also choose their character’s gender, but some of the stories only have one gender to play as, usually female. When players first start out, they will have limited options. However, as the game goes on more outfit options are unlocked. The outfit and character design can also be changed at any time. 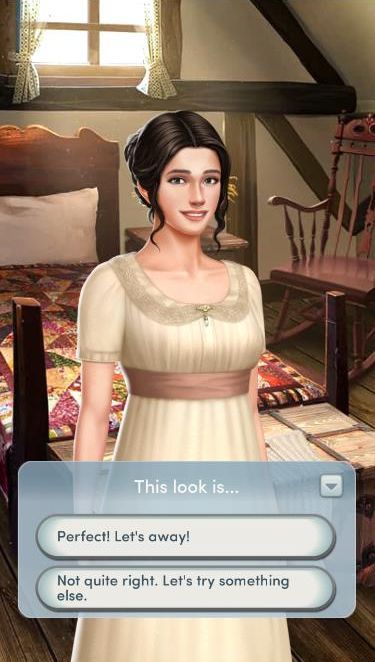 As the name of the game implies, the choices a player makes drives the whole game. The choices in the game usually come in the form of dialogue options. These dialogue options (what your character says to the other characters in the game) can affect their relationships with others. These relationships can help you to make friends, enemies, and advance romantic plots.

However, not all choices are created equally. That’s where the diamonds in the game come in. If a choice is inherently better than the rest of the choices offered, it will “cost” diamonds to choose. These options sometimes come in the form of dialogue options or new outfits to buy. Buying the dialogue options or a new outfit for your character can unlock new story arcs or make other characters think more highly of you. 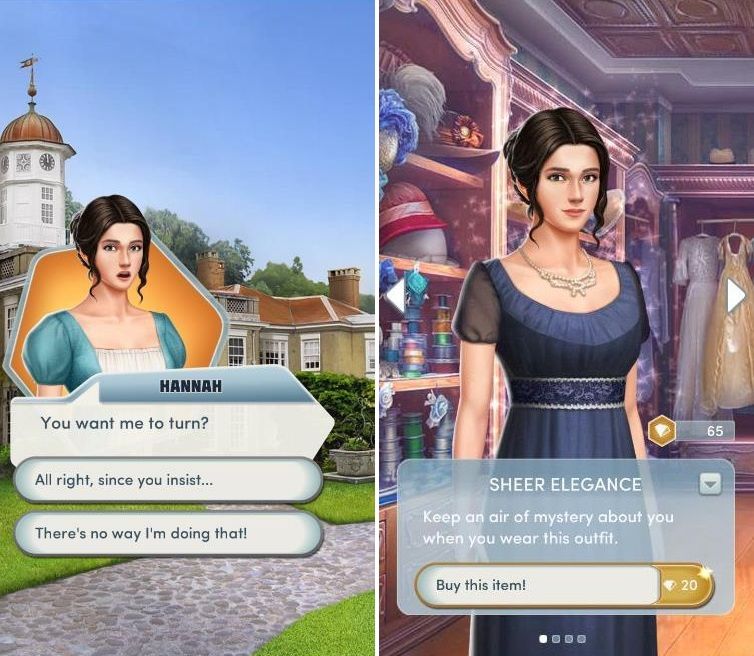 It is clear to see that diamonds are important to the gameplay. While Choices is not a “pay to play” game, having more diamonds can help players to pick better options for their characters. At the beginning of the game, players start out with 65 diamonds for free. Organically speaking, players can earn diamonds by watching advertisements (which are always optional) within the game. Players also earn two diamonds for every chapter in the game they complete. Of course, which most diamond options costing about 20 diamonds, it can take a while for players to save up enough diamonds to make new diamond choices. 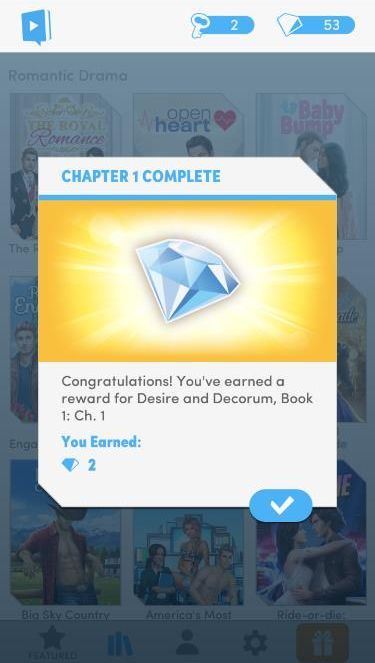 To read more of a story, players need to use a “key” to unlock the next chapter. Unlike diamonds, there is not a way to earn keys by completing chapters or watching advertisements. Instead, players need to wait for the keys to “recharge” on their own.

Unless players buy keys in the game’s store, they can have a maximum of two keys stored up at a time. Once players use up a key, and therefore have less than two left, a timer will begin automatically that counts down to when a new key will be available. In the current game version (v2.6.9), it takes one hour for a key to become available for free. For this reason, players can usually only play a few chapters at a time before needing to wait for hours for a new key to be available. With chapters taking easily less than half an hour to complete, there is much more waiting than playing involved if players do not buy keys.

This hack is provided by Ethershock. To use the hack, your game needs to be connected to an email account. It doesn’t matter if you are using Apple or Android phones or tablet to play. Once you get to the website, all you need do is enter your email address or username and press “Connect.” 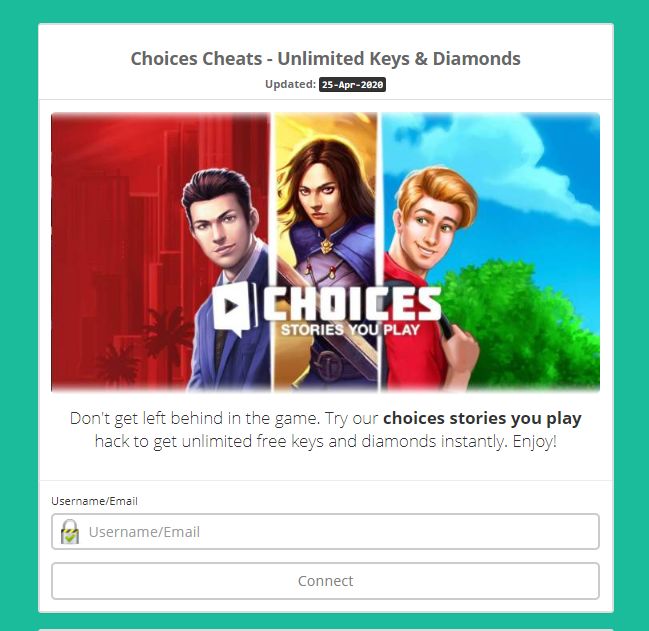 Players who use this hack say that it takes about three minutes for the diamonds and keys to get to their Choices account. So, if the diamonds and keys do not show up right away, don’t worry. Players may need to restart their game after a few minutes to get results. Be patient! It will be worth it!

Below are some FAQs about the Choices: Stories You Play game that have not already been covered in the article that players may want to know more about.

No, you do not need to sign in with Facebook to play Choices. Signing in with Facebook ensures that your game is saved, even if you delete the app off your device and reinstall it later. For this reason, it is best to link your game to your Facebook account. However, the game does not play any differently if your account or not.

What languages is the game in?

Currently, the Choices: Stories You Play is only available in English.

Can I replay chapters?

Sometimes you can replay chapters and sometimes you cannot. Players can replay a chapter that they have just completed in case they want to go back and make new choices. This option will appear when a player completes a chapter. However, players cannot currently go back to older chapters to replay them unless they restart the book from the beginning.

Can I replay books?

Yes, players can replay or restart a book whenever they like, even if they have not finished the book yet. To replay or restart a book, click on the circle button with an arrow in it. This will reset all the story’s progress. However, if you spent diamonds on any of the choices the last time you played, the diamond choices should be free during your next play-through.

Can I read more than one book at once?

Yes, you can read as many books as you want at a time. Only one story will show up on the screen at once, but players can switch back and forth between new or already-started stories whenever they want.

Do I have to read series in order?

Players do not have to read a series in order. For example, reading the first book in a series does not unlock the next book. All books in a series are available to read from the get-go. However, it will make much more sense to the reader to read the books in order.

Does the game have sound?

Yes, the game plays music in the background. The music usually matches up with the vibe of the story. However, the characters do not speak, and the stories do not have voice-over narrations. Players need to read the dialogue instead.

Choices is a great mobile game that turns dull choose your own adventure stories into something more personalized and dynamic. With great artwork, compelling storylines, customization options, and dozens of stories to choose from, this game has something for everyone. The free diamonds and keys hack makes the game even better. The diamonds allow players to make any choice in the game they want without needing to worry about budgeting their diamonds and the keys allow players to read new chapters whenever they want. All in all, this is a great game that’s free to download, so what are you waiting for? Play now and find your new favorite story!