You are here: Home / Reviews / How to Survive in Green Hell?

Survival games became a huge genre over the last years. We can see that there are many types of survival games nowadays. Some of these games are even multiplayer. These games are speaking to the primal instincts of us, surviving is the best thing humans do. We have seen tribes surviving for thousands of years in the same location. Mainstream media also loves the idea of anyone stranding on an island and trying to survive. The idea of modern man trying to survive in the wild is etched into many fields from advertising to movies. Green Hell is a really interesting depiction of this.

As we have said before survival games come in a lot of varieties. For example, the Ark series is an interesting version of survival where we are on an island with dinosaurs.  The biggest problem with survival games in the past was the playability for a long time. As our characters spent hours inside the jungle the games started to become boring, because there was nothing more for us to do. But this changed with improvements in the gaming industry. Nowadays most of the survival games are playable for hundreds of hours. Green Hell developers are certainly trying for this as well. Today we will check on how to survive in Green Hell?

Nature is NOT Your Friend

When we are taking a look at a game like Green Hell we can see that there are many different methods for playing the game. However, no matter how you play, you will be fighting against nature. The game takes place in the Amazon Rainforests and you have everything in the game from leeches to snakes. In order to survive you need to use various means, for example, I never thought a coconut would be so useful in the game. Players can use coconut to do many things, from making soup inside to using it for other tools. We will try to explain things as easily as we can. 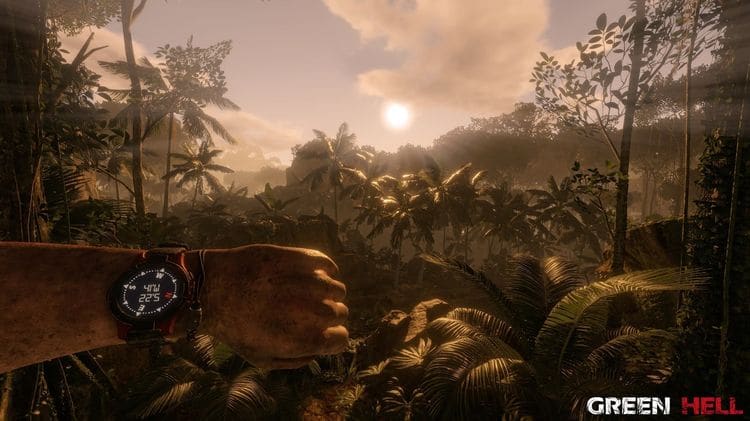 The number one thing you need to make is an Axe when you start the game, they are very useful. Afterward, look for an open area and try to build a shelter immediately. Your shelter is the only place where you can save your game in Green Hell, therefore do it. You need to think about your vitals, hunger, and thirst. Drinking unsafe water is the number of mistakes you can make in the game since it can contain illnesses and they are very hard to treat. Dehydration kills you slower than a disease and easier to cure. If you want the easiest way to collect water we can tell you to leave the coconut shells out in the open, when it rains they will collect water. 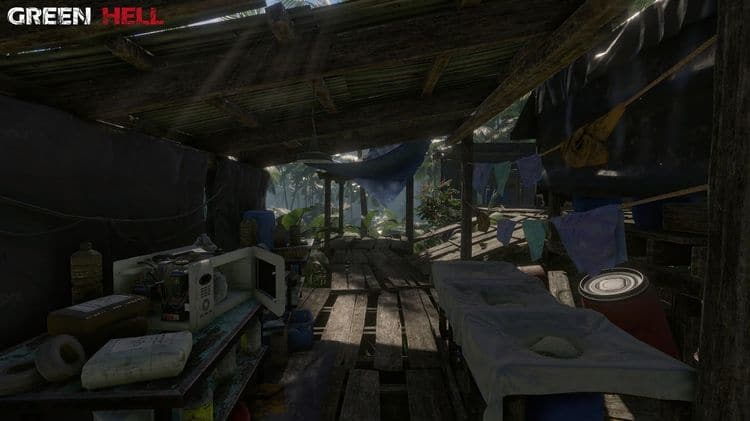 When you are in the wild, you will see lots of different edible plants. Some are poisonous some are not, but a general rule of thumb is if it looks bad it is generally poisonous. In the wild, there are lots of animals as well. One of the most interesting things is that you can even harvest honey in the game. In order to do this all you need to do is throw a rock to the nest and set a fire going, do not poke the nest with a stick unless you want to die. Wasps will leave you alone if you have a fire close to you. The true problem in the game is not the animals, it is the disease.

After playing Green Hell, you will thank modern medicine. In Green Hell diseases are the most annoying thing. The most common wound is a bleeding wound which you will need to treat immediately otherwise you will slowly die. All you need is Leaf bandages or banana dressings, they will close the wound. If you get bitten by a snake or scorpion our best advice is tobacco leaves as they are very useful in fighting with both the venom and the wound. Parasites are a problem in the game as well, as they will increase your resource usage and you can die because you can not sustain it. use blue mushrooms in order to combat parasites. 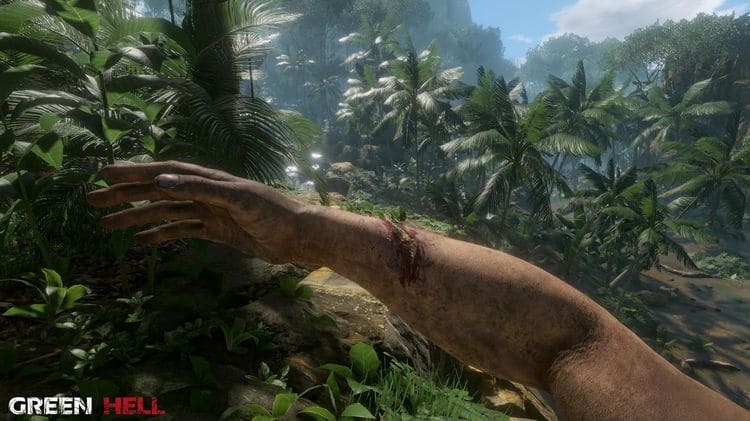 Also keep in mind that some locations will get you some problems, if you walk in a dirty pond there is a big chance that you will get some leeches on your body and they can cause hallucinations. The easiest thing is to pick them off one by one. Some stuff do not need medicine, for example, you can cure your fever by sleeping for a long time. The medicinal plants you need to keep in mind are Banana Leaves, Molineria Leaves, Tobacco Leaves, Quassia Amara Flower and Water Lily most of these can be used as bandages or as medicine for diseases.

Hunting in Green Hell is an essential part of the game as you will need a lot of things from the animals. However, be careful there is always a bigger fish. There are Jaguars and Pumas in the game as potential killer mammals, however, if you can manage it you can take them down with a spear to their skull. Spear and traps are our number one friend when you are hunting in the wild. The easiest hunting is actually catching fish however they do not provide you with a lot of fat, therefore they are not as nutritious as red meat for example. The highest quality meat you can find in the game is from hunting Capybaras. You can also eat insects in the game. However, the most dangerous animal in the game is Black Caiman reptiles. These animals are very slow, however, with one swing they can nearly knock you down. So stay away from them. You can use traps for many animals in the wild, including fish. 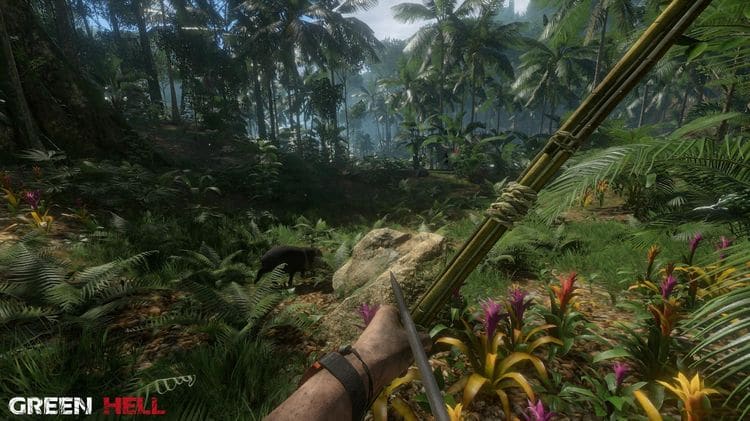 Crafting in Green Hell is easier and more practical than most of the survival games out there. The easiest thing that you can craft and the most useful one, in the beginning, is your stone ax. You only need a wood stick and a small stone. However, do not expect a lot from this axe, this is just for the beginning. Generally most of the items in the game have several different varieties with different materials. For example, in order to make different bandages, you will need to mix molineria leaves with the required material, tobacco leaves will cure venom, honey is for rashes. In order to craft materials, you will need to think about the combination of items. 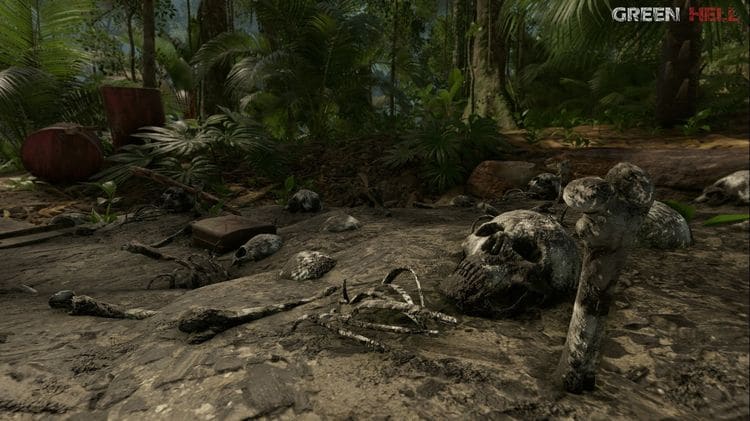 You can also forge items in the game. However, unless you are cheating you will not be reaching there until mid-game. Forging requires a lot of materials and time. You will need to find iron in various caves and there is a big chance of you dying there if you go inside with a stone axe and nothing else. Also, you will need molds in order to create the forge. You can also craft simple armor from the animals such as armadillo shells, these are very effective against other predators.

There we go, How to Survive in Green Hell? We hope you will enjoy the game with our little guide, remember in this game nature is NOT your friend.